ClickLikeThis helps adventurers get the most from their GoPro. When you use our links, we may earn an affiliate commission. Learn more.

Looking for a great action camera, but not ready to spend on a premium GoPro? In this post, we’ll look at the five best cameras like GoPro but cheaper. These alternatives are solid – great feature sets and solidly reviewed by hundreds (even thousands) of actual users.

I’ve included two videos for each camera so you can see actual footage and images from these GoPro competitors.

The GoPro is considered (by many) the best action camera because of its video capabilities, size, weight, and durability. But the cameras on this list can hold their own. Some of them even have features that you won’t find on a GoPro.

Let’s take a look at five cameras like GoPro but cheaper.

Why Consider a GoPro Competitor?

While GoPro has set the standard in quality and features, there are a few reasons you might consider an alternative camera.

If either of these apply to you, you’re going to love this post.

There are a lot of GoPro alternatives that didn’t make it on our list. The five that did are here because of their price, features, and durability. Here are 7 features to consider in your action camera.

The most popular choice for video capture is 1080p at 60fps. All of the following cameras have this ability. All of these cameras come with assorted mounts, most with remote controls.

Note: None of these cameras are waterproof without a waterproof housing (which they all include at no charge). You will ruin your camera if you submerge it without the case.
While I’ve included 5 options, the following camera is my top pick. If you just want the best camera like GoPro – with great features, you should pick up this one.

Akaso V50 Pro: Without doubt, this is the best camera in the GoPro alternative category. It comes fully equipped – with some settings even better than the newest GoPro.

It features 4K/30fps, 20MP photos and a touchscreen. It also has electronic image stabilization (EIS) and external mic support.

Here are my picks for the top 5 cameras like GoPro:

All of the cameras on this list are cheaper than the GoPro Hero9 Black. Let’s take a closer look at each of these cameras. I’ve included 2 videos for each camera (a review and unboxing video each).

Be sure to watch the videos, they’ll help you get a good idea of the quality and best features of each camera.

Akaso V50 Pro: This is without a doubt, the best camera in the GoPro alternative category. It comes fully equipped – with some settings even better than the newest GoPro.

As you probably noticed, this looks nearly identical to a GoPro. The primary differences include: tripod mount (in-camera), higher resolution photos (20MP) and it ships with a ton of accessories. Plus, it is less than half the price of a camera from GoPro.

Here’s the full video review of the V50 Pro. It includes sample footage and photos.

Out of the action cameras that are GoPro competitors, this is my personal fav. If I was going to go off-brand and get a non-GoPro camera – this would be the one.

Learn more about the Akaso V50 series of cameras in this comparison post.

Campark ACT74: This is the best rated camera like GoPro. Obviously, the low price is a pretty huge attraction. But the feature set is impressive for a low cost action camera.

It is worth noting that, like many older GoPro Heros, this camera does not have image stabilization. You will definitely notice the shaky footage when hand holding the camera.

I recommend a stable mount (like the UltraClamp) when on a boat or in a vehicle. A clamp mount will keep the footage steady and watchable.

Or if you are on the ground, you can use any tripod. I always travel with a Joby Gorillapod. It’s stable and lightweight.

Curious what the footage is like? Here’s a taste by a traveler to San Andres Islands. His footage reminds me of the quality of the Hero3 cameras – that were released more than 7 years ago by GoPro.

Here’s a video overview of the features and some more sample footage.

With more than 3400 reviews on Amazon, this camera is worth look. It is one of the best-rated cameras in the whole “alternative GoPro” category.

Akaso EK7000: This GoPro lookalike shoots in 4K but for a fraction of the price. It even has a 2″ touch LCD screen for changing settings and composition.

The EK7000 has a newer model, the EK7000 Pro. It has a few upgraded features and for a similar price to the base model. The biggest difference is the new Electronic Image Stabilization (EIS).

This is by Akaso, the same company as my Top Pick. This is worth considering. Once this new model has more time to market, I’ll publish a full review.

It is worth noting that this camera does not have image stabilization. To avoid shaky footage when hand holding I recommend a stable mount, like the UltraClamp when on a boat or in a vehicle.

Or if you are on the ground, you can use any tripod. I always travel with a Joby Gorillapod. It’s stable and lightweight.

At 4K resolution, you can shoot at 25fps.

Control your camera with your mobile device via WiFi, just as you would with a GoPro.

This model is the most reviewed model of action camera on Amazon. 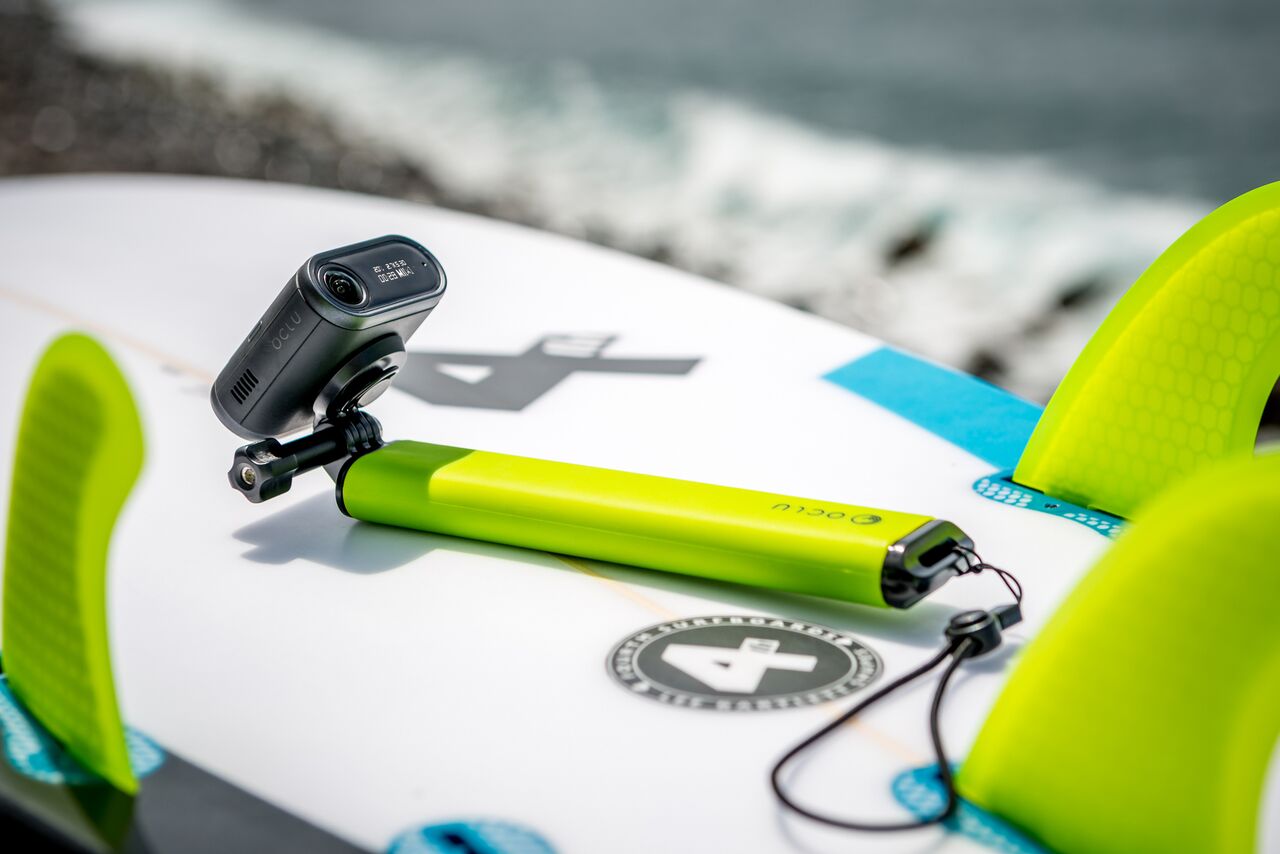 With the additional housing (shell), it becomes waterproof to 164 feet (50 meters).

And comes with automatic wind noise control. This is decent for a camera like this. I tested it and the wind reduction worked pretty good.

One feature I love is that it has a 1/4″ threaded mount for all standard tripod and mounts. It also ships with a small adapter to also fit with the standard action camera mounts (like GoPro).

I should mention that it doesn’t support an external microphone. Also, from what I can tell, it doesn’t auto correct the horizon, like other cameras. This means that if you film with the camera upside down, the footage will also be upside down. And corrected later in editing.

I want to mention that a few months ago, OCLU sent me a free review unit with accessories to try it out. 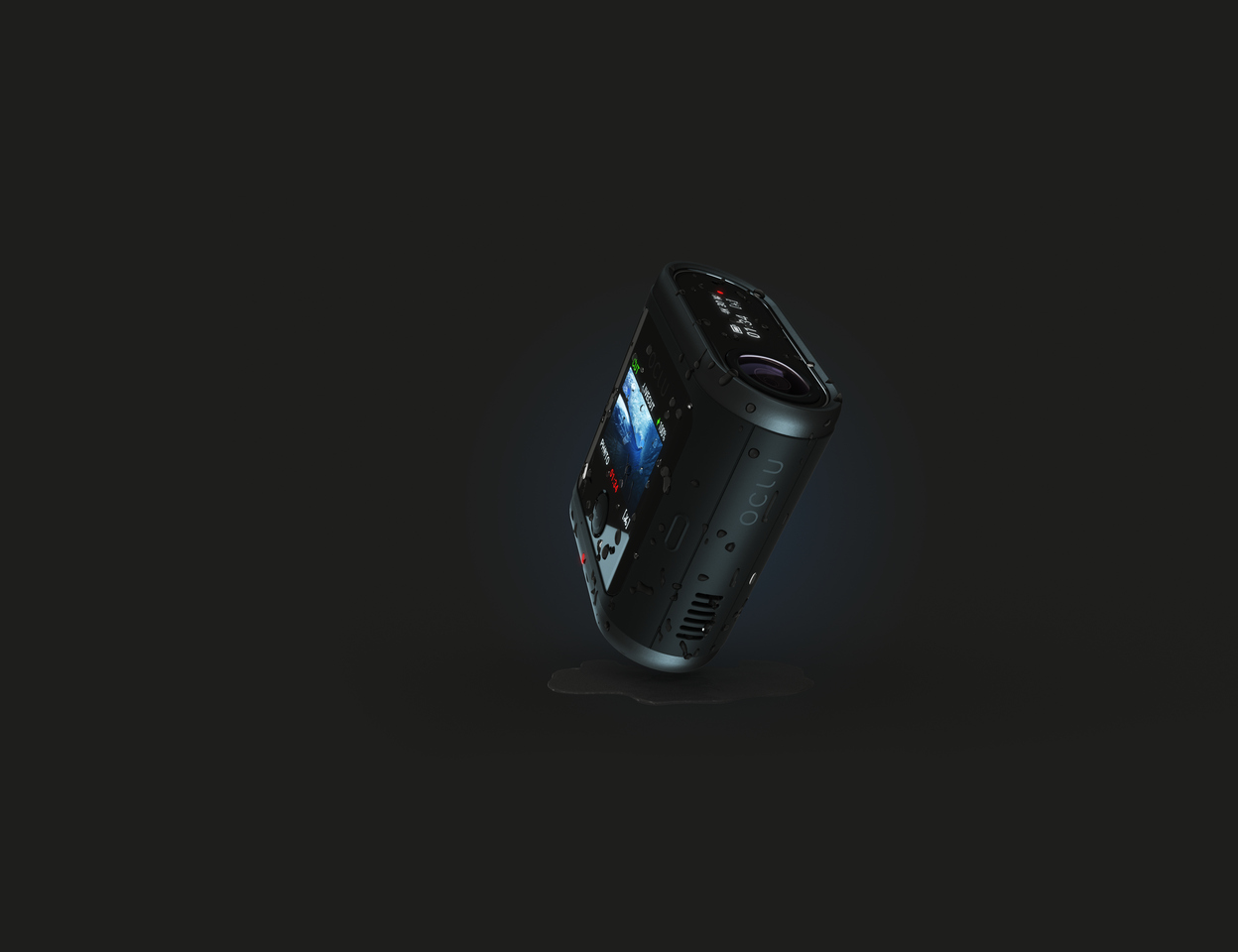 Here’s a video overview of the features.

Over all, this looks like a great camera. It is obviously an entry-level camera, but even so, it has some surprising features.

VTech Kidizoom: This is a great camera for kids. The focus isn’t on video resolution or premium settings.

Because the resolution is low, it will take forever to fill up the memory card. And the battery last 2.5 hours – the longest of any of these cameras.

Shoots video, photo, and time lapse videos (up to 120 images).

I should mention that it doesn’t support an external microphone. And it doesn’t have image stabilization. This is super noticeable in the following video.

Video review of the VTech Kidizoom

And here’s a super cute kid review demonstrating how user friendly this camera really is.

There are some in-camera features to add frames, overlays and video intros. It comes with 3 games as well.

The camera comes well-reviewed – especially for ease of use. This is obviously, an important feature for a kids camera.

This camera excels outdoor and really struggles in low-light and indoor settings.

Learn more about how to zoom with GoPro.

What Will You Do?

Have you decided which camera you’ll get?

Cameras With Higher Resolution than GoPro

Some of the features that got me excited about the cameras on this list are that a few have a higher megapixel photo capture than the GoPro.

While all of these models (expect the kids action cam) shoot in “4K” they interpolate that resolution so the quality won’t match a true 4K camera.

The biggest improvement over the past year in action cameras is image stabilization.

The only brand in this list to offer Image Stabilization is Akaso. And they have two models.

Both of these models also have LCD touch screens. While all of the models in this post have LCD screens, the touch control feature is an important one, and quite uncommon in these GoPro alternative cameras.

Don’t forget to pick up these additional items when you order your action camera.

Still thinking about getting a GoPro? You might want to check out our GoPro comparison guide and chart. We compare all models, features, and differences.

Will you go with one of the cameras like GoPro but cheaper on this list? Or maybe you already have one, please let us know what you think by commenting on this post.

Dena Haines is a co-founder and blogger on ClickLikeThis. We cover action cameras and outdoor photography with a focus on GoPro cameras. She also blogs about travel at Storyteller.Travel and is partner at Storyteller Media, a publishing company she started with her husband, Bryan.

clicklikethis.com
6 GoPro Hero5 Tips to Use Your GoPro Like a Pro
← Previous
How Long Does a GoPro Battery Last? (8 Tips for a Longer Life)
Next →
Click here to cancel reply.

This site uses Akismet to reduce spam. Learn how your comment data is processed.

So probably a dumb question but I want to try my hand at documentaries. Setting a bunch of DSLRs camcorders is a little intimidating for the average person being asked questions. I was thinking the low price = more cameras, and smaller cameras mean less intimidation for the person I'm interviewing. But are these a good choice for 4K documentary filming? I want three or four cameras to capture everything during the interviews and during my story telling on locations. For example, my family started in Salem, Mass. That would be a cool doc to make blending history with witchcraft, the public's opinions, some professors et al.

Which camera do you recommend if any, and why? Thanks

Great list Dena. I have been a GoPro user for last 4 years and recently I purchased Akaso V50 Pro which is a nice addition to my gear. GoPro alternatives are coming to market very rapidly and it's great for the end user to compare these action cameras. Thanks!

Do any of the cameras have a waterproof remote control? I want to put it in my wrist while kitesurfing. Thanx

For me, I would choose the camera with the best set of features - the V50 Elite. It isn't much more money, and it shoots 4K/60fps (double the Pro rate). And it is waterproof rated for 40M (compared to 30M).

This site uses Akismet to reduce spam. Learn how your comment data is processed.

About Bryan and Dena

Ready to use your GoPro?

Join us – and learn how to get the best photos and videos from your GoPro camera. We publish GoPro tips, in-depth tutorials, gear reviews, and our own travel experiences. GoPro cameras are one of the best 4K video cameras for vloggers.

To help you get started, we created: How to Use a GoPro. This epic guide covers all aspects, including settings, time lapse, underwater, and accessories.

On the fence about getting a GoPro? Here are 13 things to consider (before you buy).